The Legacy Challenge has begun!  But before we visit our town in Simnation, perhaps we should introduce our intrepid founder?  Meet Alexander Wolfe: 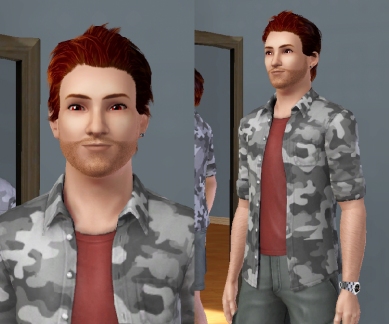 Born to Marjorie and Klaus, Alexander has just become a Young Adult and is looking to start his new life in the tropical paradise of Sunlit Tides the beautiful desert oasis of Lucky Palms.  Alex grew up with his parents across the Sim-Lantic ocean in the small rural villages and quaint towns of Sim-ope.  He was born in his mother’s native town of Champs Les Sims.

His father, Klaus, was a wandering spirit, afraid of putting down roots, and moving the family from town to town, country to country.  His mother, Marjorie, enjoyed mingling with the upper-echelons of society, attending formal events and parties.  His parents refused to settle down in any place for too long, so Alex had difficulty keeping friends or putting down roots.  He spent much of his youth mingling with the local flavour, but had not learned any of their trades or skills.

Eternally curious, Alexander spent his youth dreaming of a place where he could build a reputation for himself, a place where Sims would know the great name of house Wolfe.  And fear it!  Throughout his teenage years, he became quite convinced that the family needed to cross the great ocean and move to the great Simnation.  Sadly, his parents enjoyed their lifestyle and refused this idea.  Taking a small sum of money, Alex moved away, never to see them again.

Evil: Alas, all Sims born into the Wolfe family are evil by nature.  They take pleasure from other’s pain.  Some Sims just want to watch the world burn.  That is why they have the red eyes, non?

Genius: Alex is well-gifted in the intellectual pursuits.  An evil genius, is this perhaps too cliché?  He’s very bright and ready to start learning the Skills that will help him succeed.

Charismatic: Alex practically exhumes Charisma, and he will need all of his skills to meet and persuade the locals to help him out!

Lucky: Some Sims just seem to get all the luck, and Alex is one of them.  He’s gonna need it!

Vegetarian: After witnessing a horrible event at the Petting Zoo involving a llama attacking a lion, Alex has refused to eat meat or any product that comes from animals.

The Emperor of Evil: Alexander wants Sims to cover before him, as you do.  His lifetime goal is to reach Level 10 of the Criminal career track.

(I was initially considering making him the first Mayor of Sunlit Tides Lucky Palms, but no.)

Favourites: Alexander’s favourite dish is Veggie-Burgers, he loves Electronica music, he appreciates the colour Red, and he is a Scorpio.  I’m sure all of these details will play important roles in the story.

The last time I played Sims 3, it took forever to load and save the game.  I’m not sure how many mods I had installed, but I want to make it run as quickly as possible.  So I’m trying to keep the mods and custom content to a minimum, just the bare necesseties, to keep the game from going crazy.  Here are my mods:

These mods address issues in the Base Game:

Rick’s No Intro: To stop that darned video!

Velocitygrass’s No or Fewer Memories: I do not need to remember every dish my Sims clean!

These mods released by Twallan are like AwesomeMod, only customizable:

Animator: Helps me set the Sims in curious poses.

HomeOpener: Lets me see inside a house to figure out if Sims are home.

MasterController: Does a lot of things that I don’t understand.  I might remove it later.

NoCD: Lets me run a game without the disc in the drive.

OnceRead: Sims will try and read new books instead of rereading old ones.

PortraitPanel: Allows for 24 portraits.  (Does this mean 24 Sims to control!??)

Register: Sims can be Tattoo Artists and still have a job.

Saver: Reminds me to save the game every now and then.

Story Progression: Fixes EAxis coding to make more sense.  I had to disable some pieces because it kept telling me every single time a Sim gained a skill or got a promotion.

WrittenWord: Any books my Sims write are available in the bookstore.

I’m playing this Legacy Challenge with an altered version of PinStar’s rules.  Most of the rules are the same, but I’ve had to adapt parts so that I can have a 12-generation legacy instead of a 10-generation legacy.  So here’s the rules:

This is how I am setting up the Legacy Challenge:

-I’m removing empty lots from the area so that I can place Community Lots for expansions.

-I’m creating a brand new Young Adult in CAS to be the Founder.

-I’m not allowed to create any other Sims for the neighbourhood or the Founder’s family.

-The Founder is not allowed to marry a rich Sim.  Any future generations can.

-I’ve got these Mods Installed, mostly for sanity reasons or to prevent EAxis from discombobulating the neighbourhood.

Rules of the Challenge

These are the basic rules of the challenge:

-No using cheat codes to give money or other advantages.  Moving stuck objects or Sims is okay.

-No using mods or EAxis objects that feel “cheaty”.  An example of this is the fountain of youth from Hidden Springs or a dragon from Dragon Valley.

-The Legacy Family must always be the active household.

-I am not allowed to merge any household with my Legacy Family.

-No resurrecting the Founder, Heir, or Spouse as a Ghost.

-Sims are not allowed to hold death flowers to ward off death.

-Sims are allowed to have the Kleptomania trait and sell at the black market.

-Any Sim in the neighbourhood is allowed to move onto the Legacy Lot, except the ones that have already moved out.

-Sims can use birthday cake to age up only on the same day they do it automatically.

Changes to the Rules

These are the changes I am making to Pinstar’s rules:

-I will install a new expansion pack for each new Generation.  So the Founder will use the Base Game expansion, the following Generation uses World Adventures, the one after that uses Ambitions, etc.

-To ensure the next generation is given a fair shot at the traits and Lifetime Wishes, I will install it after the Spouse is pregnant but before she gives birth.

-Each new generation will use one of the expansion’s Lifetime Wishes.  (I may have to reroll a few times to get it.)

-Each new generation will have at least one of the expansion’s Traits.  (Again, I may have to reroll to get it.)

-Each new generation will use one of the expansion’s Careers (where possible).

-I want to explore the different life-stages of Sims (Ghosts, Servo, Aliens, etc), but many of them are considered “cheaty” because they live longer and have advantages over regular Sims.  So I am thinking I will allow each generation to have one supernatural creature.  For example, a Ghost in the Base Game generation and a Mummy in the World Adventures generation.

-However, the supernatural creature may not be the Founder, an Heir, or a Spouse.  It can be a Spare or a Roommate.

These are the optional rules I am following:

-Family Trait: The Founder and anyone born into the family choose the Evil trait.

-Patriarchy: The Founder and all of his Heirs are male.

-Eyeocracy: The Founder and all of his Heirs will have red eyes.  (Or not, we’ll see.)

-Founder: The Sim created in CAS.  Is also the Heir until the next generation is born.

-Mate: The current wife/girlfriend of the current Heir.  She can collect Legacy Points after giving birth.

-Heir: There can be only one!  The current generation’s Sim who will continue the challenge.  He will be able to trace his lineage back to the Founder.  No adoptions.

-Spare: Any sibling of the Heir who is not expected to continue the Legacy.  If the Heir dies, a Spare can take their place.

-Roommates: Any other Sims living on the Legacy Lot.  May or may not be relatives.

-Townies: Anyone who lives outside of the Legacy Lot.

-Legacy Points: A way to score how well the challenge is going.