Chapter 9: Another Sim Bites the Dust!

So much stuff happened this week, and an unfortunate death, so let’s get right into it!

Alexander is 79, and the twins have 8 days left before they’re young adults.  It’s Roxanne’s birthday; now she’s an elder but she still hasn’t finished her LTW. Oh noes! 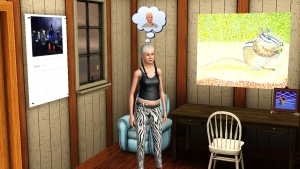 What a bizarre outfit for work.

Those Steel Bladders are really effective time-savers, so now both the twins have them installed.

Hermano and hermano are quite grumpy and their relationship is plummeting faster than…. *googles* … “marriage opposition in the GOP”. (Now that’s what you call topical humour!)

Ezekiel is given the random task of extracting potato skins from the toilet in the Desert Diner.  Clearly a musician is best suited for this sort of thing!  Roxanne is promoted to Backup Vocalist, just 3 more promotions to go!

Ezekiel Reid is 91.  If you hadn’t guessed from the title, he died.  Fortunately I was able to buy one of those fancy Food Replicators with all the LTW points he saved up.  Anyways, he was tinkering with Tristan’s laptop when this happened:

He literally set their bedroom on fire!  But that’s not how he died.

After putting out the blaze he went to host an autograph session for §5,100.  It was there that he passed away from old age.  Nobody from the legacy family was present but his daughter Ginny Shaw was talking to him when it happened.  (I don’t know if that qualifies as lucky or unlucky.)

Even though Alex had a negative relationship with Ezekiel (bordering on arch-nemesis), he is sad that his old friend passed away.

And I never found out why Ezekiel hated Alex.

And that’s when I, Mister Wolfe, realized that when Ezekiel died he took the Sloppy Jalopy with him. 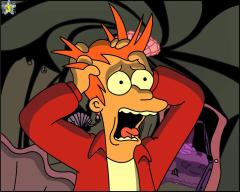 The NRaaS was doing something weird where every family surname is hyphenated.  It was getting very confusing and producing names in triplicate like Beatriz Claremont-Dreamer and Hanson Diwan-Gilbert.  I’ve turned it off but I’m afraid the damage is done.

Alex has been asked by The Organization’s Evil Incorporated division to study Martial Arts upto level 5 for a raise.  He’s also gotta deliver some Renoit Grapes to the theatre for Nectar Appreciation, so I guess they’re going to France sometime soon.  Tristan is asked by the school to fix the exploding boiler for §300.  And Roxanne teaches a music class for §500.

Now that the mourning period is almost over, it’s time to find a new roommate.  Alex has a vast rolodex of contacts since he knows almost everyone in Lucky Palms.  I was debating if I should look for a Sim with a cool career reward, or one that makes mad dough (so I can buy up real estate).  In the end, I choose money!

The prospective roomate is a Sim known as Joe Maltapin-Hudson. (Or just Joe Hudson.)  He’s at level 5 of the Medicine career and is likely to be raking in the money soon enough.  He lives in a big family with his children, ex-wife, in-laws, and some others.

“He waves the stick around and then music is born!”

I found it very hard for Alex to build a relationship with Joe.  They had all positive interactions but the relationship bar kept dropping every time I checked it.  Also Darleen Maltapin-Dreamer started slapping Alex for no discernable reason.  She is his second arch-nemesis!

It’s also Cascadia’s birthday, now she gets to start doing cool things too! 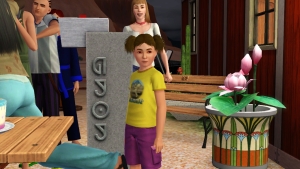 Cascadia got the Perfectionist trait.

Tristan’s last book is worth §300, so he starts “The Clock Strikes DEATH!”.  Did I mention Tristan has a full-blown crush on Tanner?

“Your shirt is so soft, do you use Downy?”

Tristan wrote his first best-seller, it’s worth §612!  He’s achieved the well-known author for writing enough Fiction books.  Started the next one titled “Master of Labyrinth”.

Alex wasn’t having much luck      building a friendship with Joe, so Roxanne goes over to give it a shot.  Also Joe moved to a bachelor pad so he literally has §0 in the bank.  Roxanne was also promoted to Lead Guitarist (2 left!) and needs to go to China to learn a new type of musical style.  I bet it’s Swing. 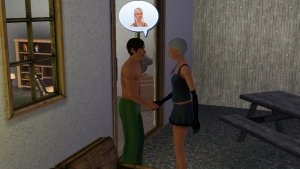 This looks naughtier than it is!

Roxanne was able to convince Joe to move into the legacy house after spending all night harassing   scaring  bribing  befriending him.  And now he is ours!  Mwahahahahaha!! 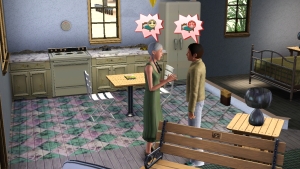 Virgil has been spending all week breaking boards and has completed his challenge.  Tristan’s last book is worth §390, so he starts writing “Blinding Nemo”, surely a sensational piece of droll humour.

Community death count: 29 or so

Theme song of the week:

Ezekiel stands guard over his grave.

5 responses to “Chapter 9: Another Sim Bites the Dust!”