Oh right! I’m supposed to post once a month! I hope I’m not too rusty.

Serefina & Niobe have 2 days left before they’re Elders, Hyperion & Deo have 9 days until they’re YAs, and Belladonna has 2 days until she’s a teen.

Case 17: Tomatoes with a Pulse: Genetically Modified Organics.  What is this world coming to..?  Tiffany Dog-Gonnit wanted me to look into a shady grocer ripping off the rubes of this town.  I felt great but Dr. Sheri Dheri-Iheri told me I’d consumed dangerous HydroSimoxoNooper.  With cold hard facts this poison was flushed like last week’s casserole.

Prometheus cashed in his V-Card with Dara Dent; if you know what I mean.

A very sleepy Tungsten went into the hot-tub and electrocuted himself.

Prometheus did some repairs on Tungsten.  Were his eyes always RED? … Hmm, I’m sure he’ll be okay. 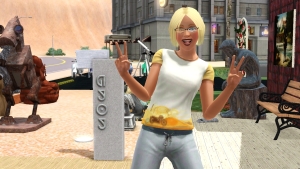 Prometheus is a Master Inventor! 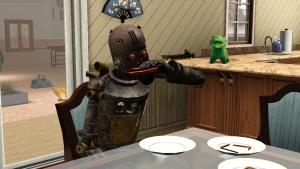 Case 18: His Number One Fan: Self-stalkering.  What is this world coming to..?  Rock legend Chris Loe-Stee feared stalkers tracking his every move, but a guitar pick covered in spit with the same IP address proved otherwise.  To my chagrin local Doc Leslie Dent clued me in; with his split-personalities he’s a few prawns short of a galaxy.

Inspector Brady’s on the case!

Serefina has a building disaster at the Science Lab; a malfunctioning Simbot got loose and was terrorizing people.

Speaking of malfunctioning Simbots, Tungsten starts a huge fire at the Lucky Palms Sports Zone bar.  It looks like this:

Editor’s note: Kids, do NOT try this at home!  It is VERY unwise to start a fire on a community lot.  The fire seems to burn forever, you can’t call the fire department, the bar hours kicks everyone out, & elevators are just annoying. Also simbody could get hurt!

Somebody wrote an auto-biography for Serefina, and she needs to attend the book signing at the Solitary Novel.

The Sports Bar fire continues to burn late into the afternoon.  Ironically, the fire department is asked to put out a small fire in someone’s house.

Serefina and Niobe as Elders. 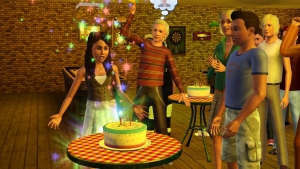 Belladonna as a Teen.

For twin marketing purposes, Niobe needs to record a radio spot for Llama Musk Perfume too.

Case 19: The Purloined Purse.  A lost leather.  What is this world coming to..?  Christy Kool-Tie dropped her pocketbook by the dunes and tasked me to dig it up.  I dig.  Turns out Tiffany Di-Gi claimed it under the ancient law of Inuentoribus Custodientes.  I’d never smack a dame so I offer a crisp Simoleon for it.  At least I worked on my tan.

*Tiffany was also featured in Case 11 and Case 17.

Another small house fire; the Sports Bar continues to burn with no sign of stopping…

Hyperion’s got a thing for Ella-Irwin Bellamore.. too bad she’s dating someone called Garick. 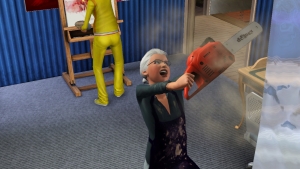 Niobe needs to hollow out some statues for criminals to hide drugs inside.

Prometheus pushed Tungsten back into the sauna and reprogrammed him again, for the better.  Prometheus also got promoted to Notable Figure (2) by accident.

Hyperion and Deo play well together!

Belladonna’s got a job as a Bookstore Clerk. 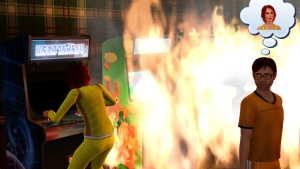 After the Sports Bar fire incident (which is still burning…), it is decided that Tungsten is too wild and unpredictable.  He moves out!

Next week: A new roommate joins the Legacy lot!

Community death count: 183 or so (Still waiting on the count from fire deaths.)

Theme song of the week: “Firestarter” by The Prodigy 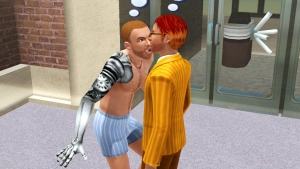 Chapter 31: Brain Without a Face

Happy New Years everybody!  I hope everyone is having a great holiday!

Right, so who’s living on the Legacy lot these days?  I feel like I need a refresher.  We’ve got: 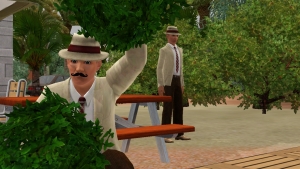 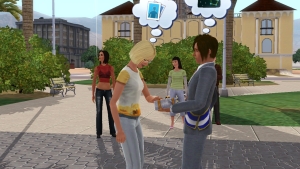 Serefina and Niobe have 9 days left before they’re Adults, Hyperion and Deo have 1 day before they’re Teenagers, and Belladonna has 2 days before she’s a Child.

I wrote down “charitable moodlet sucks”.  I hope that makes sense!

Case 14: Fing-Ringers: Framery.  What is this world coming to..?  Jess Terribly-Sturdy had me accost Tiffany Dog-God over a fabulous missing ring.  During the course of my investigation I found the bling-thing fling-ed in the house belonging to the lying liar Jesse!  All your secrets come out in the end.

During Deo and Hyperion’s birthday, their great aunt Cascadia died.  That’s another legacy member down.

As you can see, I kindof mixed up their favourite colors.  Deo was blue and Hyperion was orange, but now Deo is orange and Hyperion is blue.  Ah well, c’est la vie.  Also Serefina missed their party because of an all-night earthquake cleanup.

The school wants Deo to get a part-time job (for some reason), so now he’s a Spa Specialist.  Hyperion gets one too so now he’s a Grocery Store Clerk.  Tungsten the robotic gardener learnt how to plant Egg and Cheese.

Case #15: Seagull of Love:  Gold-digging.  What is this world coming to..?  An evaporated love affair left B. Jones jonesing for his lady love.  It was just an act, the AWOL Reisa wanted his wallet, not his heart.  Poor sucker, but at least he knows now.

Brady got promoted up to Gumshoe (level 6).  Also Belladonna’s ages up to child.  I gave her the Shy trait, let’s see what that does.  She looks like this now:

Belladonna as a Child.

In the future, Prometheus got hugged by an ancient Junkbot thanking him. Weird.  He also ate some Pineapple 2.0, which I assume I am allergic 2.0 to. 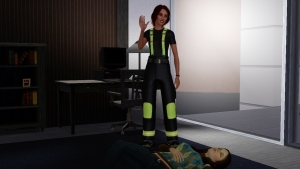 Serefina’s agent wants her to do a radio commercial for Llama Musk Perfume.  Because who wouldn’t want the pungent aroma of hair?

For some reason, Deo & Hyperion can flirt with Rene and Lewis even though they are … first cousins once removed?  Surely they are still related!

Brady got the Eagle-Eyed Eavesdropper Medallion for solving a jewel heist.  Funny, normally the Wolfe family are the ones stealing the jewels!

Brady as an Elder.

Brady’s birthday up to elder.  Crikey, he’s only solved 15 or 16 cases of the 35 for his LTW.  (I’m not counting the 4 that glitched out because they weren’t done.)

Belladonna, with her nose in a book.

Belladonna had one conversation with Niobe and became a Notable Figure.  Well that was easy!

Case 16: Brain without a Face: Marine biology.  What is this world coming to..?  Brenton asked me to search for his missing buddy, the local faceless genius Lakeside Retreat.  I followed the aquatic clues back to his sunken lair, to find the mislocated scientist removing piranha teeth.  Hey, it’s a living.

Brady was promoted to Licensed Snoop (level 7), which comes with the Sneaky-Sneak interaction.

Holy cow, Serefina got $10,000 from her commercial.  I wonder if that handsome fellow from the Paco Rabanne commercial earns that much. 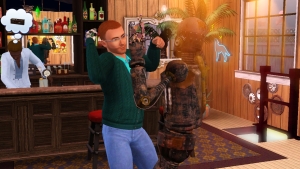 Sigh, my notes are a mess:  “Tungsten was in a saloon when banditos attacked.”  … I don’t know what that means, but I think he and Prometheus were partying.

Time for a hookah break.

Sofia (one of Joe’s children) got engaged to Gerald Lancaster-Tanner (some guy).

Most of the family went to the Amateur Olympics, except Serefina went to the hospital to entertain sick children.

Oh my gosh, one of the children from the long-standing families, Ella Irwin-Bellamore.  She simply must marry Deo or Hyperion.  Her face genetics are perfect!  We must add your biological distinctiveness to our own.

And next Sim-week, somebody on the Legacy lot will have a mental breakdown.

Community death count: 175 or so

Theme song of the week:

“Eyes Without a Face” by Billy Idol